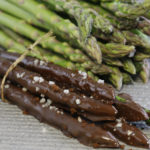 The obvious choices here are tempranillo-based red wines, but cabernet sauvignon-, cabernet franc-, merlot- and/or malbec-based wines aged in new oak barrels will also fit in the harmonic comfort zone of this roasted asparagus/dark chocolate/smoked black tea triumvirate. It should also be noted that smoked black teas other than the classic Lapsang Souchong could also be used, such as the eclectic Zheng Shan Xiao Zhong (www.camellia-sinensis.com).

A strong black coffee would also create a nice symbiosis alongside those roasted, smoked and “cocoaed” asparagus. You could also explore dry Sherries such as amontillados or olorosos, which are chockfull of methoxy pyrazines, to give another dimension to this dish. Finally, if you are looking to make your taste buds — and neurons! — shiver, look into heavily sherry barrel-aged scotches such as the Macallans!

The idea of combining asparagus with dark chocolate came to me while I was studying the aromatic molecules in the large pyrazine family. Pyrazines are extremely varied and complex aromatic compounds that make up the flavor profile of roasted asparagus, dark chocolate, coffee, oak barrel aged red wines, especially tempranillo-based ones, as well as merlot- and cabernet sauvignon-based wines.

Many recipe ideas were borne of this understanding of pyrazines while experimenting with my partner in crime, Stéphane Modat. Without this scientific knowledge of the aromatic components of the asparagus, we would surely never have gone down that creative path, let alone try to pair asparagus with tempranillo- or merlot-based reds! As a matter of fact, I dare you to serve green asparagus simply roasted in olive oil as a side dish with a nice piece of grilled red meat and a glass of any wine based on the aforementioned grape varieties: you will realize for yourself that asparagus are far from being the enemy of red wine, as so many people believe…